Well, some of you are probably wondering where on earth I went! Here’s a hint… 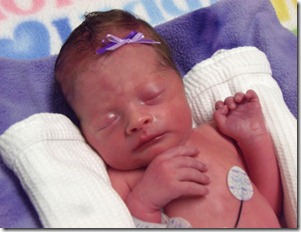 Harper came! She was 4 weeks early, and very unexpected, but we welcomed her into our family on January 4th. She was born a tiny 5 lbs 3 oz. but is a really long 19 inches! On Tuesday, (January 3rd) I woke up and was feeling a little nauseas. It was Dave’s first day back to school after the Christmas break so I laid around on bed rest with my puppy all day. I watched A LOT of Friday Night Lights on Netflix. I was so excited because one of our neighbors was bringing us dinner that night. She came over at about 5:30 pm and I was thrilled to try this soup she had raved about. I stood up to show her where to put it and we talked for a few minutes. Just then, I felt liquid drip down my leg. I didn’t say anything to my neighbor though. I was afraid that I had just lost a little bladder control. As soon as she left, Dave and I made a few phone calls and decided we needed to go to the hospital just to be safe. When we got there, they did a test and sure enough, my water had broken! We were having a baby! 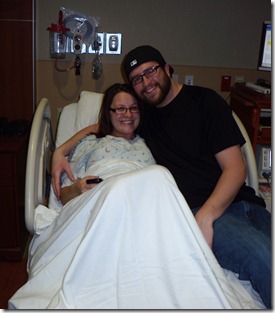 The contractions didn’t really start until about 10:30 pm, but once they did, they came hard. They were all in my back. The monitor didn’t really pick them up much, which made me feel like a pansy, but eventually they were picking up a little more. Once I was dilated to a 3, things started moving more quickly. I got the epidural (greatest thing ever!) and I continued dilating very quickly. Before I knew it, it was time to push! I pushed for about an hour and wasn’t having much progress because she was posterior (meaning, her face was facing up). They started me on “pit” to make my body continue contracting and had me rest on my side for a few hours. Those hours went by so slowly, but eventually it was time to push again! I pushed again and then she came! She was SO tiny and swollen! We got to spend a little time with her and they took her to the NICU because she was premature. They didn’t see anything wrong with her and assumed she would only be in the NICU for 12-24 hours.

After 12 hours, they discovered that Harper was having a difficult time keeping her temperature up. They kept her in an open bed with a heating lamp on her to help her keep her temperature up. She started improving and we were told she would be coming home with us shortly (possibly even when I was discharged from the hospital on Friday). 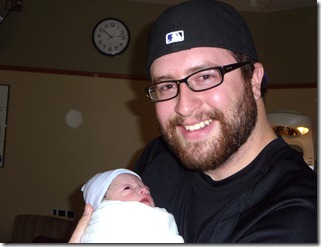 We were just so excited to have our baby girl here. Well Friday came, and Harper’s temperature dropped again. It was time for me to be discharged from the hospital. There were many tears shed, and the nurses told us about their Transition Rooms. They are rooms for families with babies in the NICU. They are rented out, like a hotel room would be, but you are just a few steps away from your baby. I needed to be close to her because I feed her every 3 hours and we live about 20 minutes away from the hospital. Friday evening, Dave went to our house to pack up a few things that we needed to have. While he was there, he started throwing up! My mom went out to our house and packed for us, took care of Dave, and then stayed at the hospital with me that night. Dave needed to sleep and stay away from the tiny babies. That night, we found out that Harper had Jaundice. 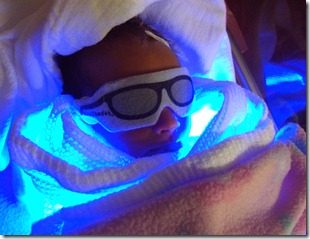 It didn’t surprise me at all. Dave and I both had Jaundice, as well as both of my brothers. Harper was put on a bili blanket and was able to sleep in my room with me that night. I was excited, but didn’t get much sleep because I was freaking out about her being ok all night. It was so nice to have my mom’s help so that I wasn’t alone. The next day, Dave came back feeling much better. Harper’s temperature was up, her Jaundice was going down and things were looking great! Our doctor told us that he didn’t see any reason why she wouldn’t go home with us Sunday morning. We were so excited. That night, we had a horrible nurse. We had been so lucky to have fabulous nurses until that point. The doctors had switched so we had a new doctor in that didn’t know Harper’s back story and only had the information given by the nurse. Instead of the nurse telling him that Harper’s temperature had been high all day, and then had one lower temperature, she told him that she had a low temperature and that is it. I went back into the NICU to bundle her up more. I had a feeling she needed to be warmer. I was a little nervous to go back and do it with the nurse there, so I had Dave come back with me. I am so glad he came because when we walked back, she was in an incubator. It was a HUGE shock. It isn’t what any parent wants to see their tiny baby in, especially with no notice at all. We were angry. We hadn’t been asked or told it was happening, or given any good reason why she was in it. Saturday night was tough.

Sunday came around and we had a great nurse that had been with Harper before. Harper’s temperature started rising again and they were able to get her out of the incubator. She was eating a lot, had gained weight, and was producing enough diapers. The doctor came in and told us things were great. He had us go through discharge things, had her take her car seat challenge, and told us to plan on leaving Monday morning! We went home to clean up things in her nursery, crank up our heat, and get everything ready for her, then came back to the Transition Room to sleep with happy hearts.

I was woken up at 2 am by a knock on my door (Sunday night/Monday morning). It was our nurse. Harper’s temperature had dropped drastically. She needed to go back in the incubator. Our hopes were shot down once again. Now I sit here at 4:30 am wondering what is going to happen. She is getting some blood work done in less than an hour to see of there is more to her temperature dropping other than the fact that she is just premature. The results will take a few hours to get here though. I just wonder how much more of this I can take. I am wearing pretty thin. Dave is going back to work on Wednesday and we had totally planned on having a happy, healthy baby home by then. I don’t know what we’ll do about where we sleep when he starts going back to work. Each day, I know that these NICU bills are piling on more and more. My husband works so hard, but he is a school teacher. I have been blessed to be able to continue selling things on my Etsy shop, but I can’t help but stress. I just want our sweet, baby girl to be healthy at home. I have faith that my Heavenly Father has a plan for us and that we have to go through this test to make us stronger. I am just really wondering when this test will be over! Sorry for the long, blabbering post. I have been kind of trying to avoid this, but I would like to have it all documented and want to share our experience with all of you great readers. I will continue to have faith and pray for our sweet Harper, and will keep you all updated!

Congrats on your early addition, Ms. Harper. I have faith that this hurdle will be behind you very soon. I will keep you and your family in my prayers. Best wishes in the coming days.

You can do it little momma! It's tough, unfair, and mean but it is but for a short time. Stay strong and keep relying on the lord, he will get you through this. Believe me, it could be so much wors. Regardless though, just remember that the lord will never give us more than we can handle, even pushing ourselves. Your growing each day and the nicu will force you to do it. Be strong, and know that you have people that love and support yo!! I am always here to talk, or if you ever need anything! I'll continue to keep you in my prayers each and every day/night! Keep yourself healthy though kenzie, just remember that if you can't take care of you, how are you going to take care of her?My mom found this quote when we were dealing with all of this, it goes; "you never know how strong you are, until strong is all you have".

As for the bills; try to see if harper can qualify for secondary Medicaid. I would bet she can get on it, which will take care of all her bills. If you have questions, the hospital has social workers that do this all day long. We were able to get Carter on it, thankfully. I don't know what I would have done had we not...I mean what 22 and 23 year old couple can pay for a 1/2 a million dollar baby! It's crazy. Let me know if you need help, I can look up the lady at the hospital we worked with, she basically did everything for us.

Good luck these next few days! Also off topic; when you go back to the salon let me know....i want in!! Love you!

Oh McKenzie, you and sweet Harper and Dave are all in my prayers! I love you so much!

Congrats! She is beautiful! Adam and I will keep you, dave & your precious little girl in our prayers!

Oh McKenzie, my heart just aches for you guys right now. I understand how you're feeling and it is so hard. We love you and everything is going to be alright. Brycen stayed in the nicu for 9 days and it was the hardest thing. You guys are strong and you can do this.