0 shares
Before I start, I have to say that I LOVE the blogs that I read that have documented their love stories. If you haven’t read any of Little Miss Momma’s, you need to! It is so good! Read her’s here.
This is where our love story begins…
It was November 2007. I had just completed beauty school and was working on my plans to move to Portland. I was going to go Portland with my dad in two weeks to interview with a beauty school that was about to open. I had plans to teach at their school and start fresh in a new, big city. I had gone through a weird, messy break up about a month earlier and was more than ready for a new start.
I had been working on myself. When I was in beauty school, I was trying to get my hours in to finish before Thanksgiving, so I had been going to school 50+ hours a week. I had gained some weight, had lost a lot of sleep, and was just pretty sluggish in general. It was nice to be able to take a little time for myself to go to the gym again and get a full night of sleep.
My best friends were all in relationships. Autumn’s boyfriend had been gone serving an LDS mission for 2 years and was just getting home. They were sure they were going to get married. Autumn had set up our friend, Heather with a boy and they had just gotten married. On my way to Heather’s bridal shower, I took a few selfies in the back seat. Don’t judge. It was a long drive…

I told you not to judge! I wanted a good, new Facebook profile picture to show off my new purple bangs. I decided on this one… 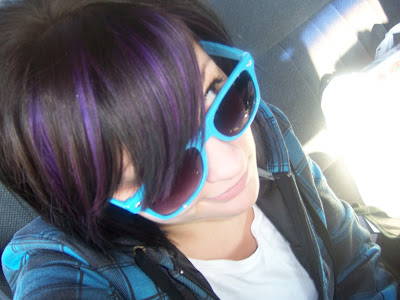 Just days after uploading my new picture, I was checking my Facebook. It was November 25, 2007. I had a friend request, but it wasn’t a real person’s name. We had a lot of friends in common. I couldn’t see much of his face in the picture, but he looked like someone that I should know. 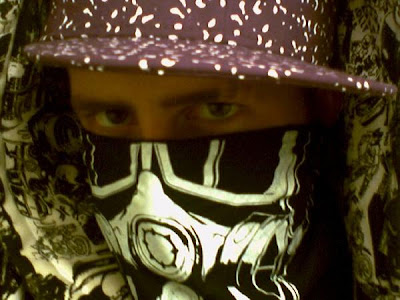 I know. The picture may air on the side of too mysterious for some people, but I was interested. His name was Danger Mouth. I wanted to know who he was and why we had so many friends in common, so I sent him a message. It said, “hey! i don’t think i know you, but i am happy we are friends now!”
It had only been 20 minutes when I saw that I had a new message on Facebook.
It was from him.
Previous Post: « Add Vinyl to Your Gallery Wall
Next Post: DIY Geometric Triangle Table Runner Tutorial »