Skip to Content
0 shares
Funny story, or maybe not too funny of a story. I came home from work to drop off Sadie puppy at my house before I had to go to a church activity. I was already running a little late, but I got the ok to feed my belly and be a little late before I went to the activity. I was pulling into my house when I noticed that there was a horse out and about on the road. There was a guy riding his bike trying to figure out where the horse belonged. I don’t know much about horses so I just pulled into my house and was minding my own business when I looked out the back window and realized that there was only one horse in our pasture. We rent out our pasture to a woman with “stud” horses. I went out back to see if the other horse was just behind a tree or in a place I couldn’t see, but sure enough there was only one in the pasture. The one in there was FREAKING out. That is when I noticed the fence that was smashed and horse prints in my lawn! That horse running amuck belonged at my house! I looked for something to put around it’s neck to lead it back and all I could find was an extension cord. I walked over there to try to coax it over, but it was trying to love on the horses across the street. I didn’t want to get in the middle of their flirt fest and take the chance of getting kicked. Just then, the guy riding the bike came around the corner. He offered to take the horse back to my pasture. I was so relieved! He took it over to the pasture, found a rope at his house, and tied the naughty horse up. The poor horse had cut his leg when he was trying to get out of the pasture and he was bleeding. I was really worried about him and continued to leave panicked messages to the owner. I was really angry with her.
To add to the stress, our backyard and most of the pasture was flooding. The ditch behind our land was overflowing and the poor horses were having to stomp around in a foot of water. When it got dark outside, and we still hadn’t heard from the horse owner (grrrr), I started getting worried about that horse. He was tied in place that he had no more food, standing in water, and he wouldn’t be able to lay down if he wanted to. I decided to go on a horse saving mission. Still in my clothes I wore to work, a cute little animal print, short sleeved sweater and shorts; I put on some flip flops and went out to save the day. Even with a flashlight, it was tough to see what I was doing, but I was able to climb over the gate and get the horse’s rope undone. I was trying to lead him over to the spot I was going to be tying him up, but my flip flops kept getting stuck in the large amount of mud and slop out in the pasture. There were a few times that I wondered if I would just have to leave my flip flops and go bare foot. Then I remembered that the last thing I want, is to get a tetanus shot. So I ripped them out of the mud over and over again, praying that I wouldn’t break them. I’m shocked that they didn’t break. When I was just about to the spot I needed the horse to be, his friend started coming over and he started getting excited! I got pretty nervous, but just talked to him like I would a puppy saying, “Come on little horsey” probably more to calm my nerves. I get scared around horses sometimes just because of how huge they are! I got to my destination, and tied the best knots I could. I could tell he was a lot happier where I took him. When I got back inside, Dave just laughed with me about my legs being covered in mud, water, and horse poo, but I couldn’t help but feel like Felicity the American Girl.

If you didn’t read her books when you were little, you wouldn’t quite understand, but I felt a little like a horse whisperer. I got in the shower, then had an overwhelming flood of emotions that hit me. Possibly because of the baby growing inside me. I was grateful that I had the opportunity to help that horse because it made me feel much closer to this guy… 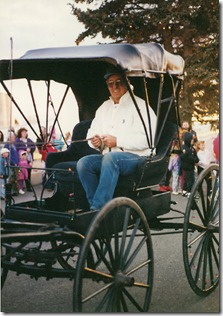 My Grandpa Miller. He passed away in 2008. I miss him every single day, but miss him the most when I see horses. He literally was a horse whisperer. Every horse loved him, and he loved them back. He was such a great example of a Christ like love of animals. Because I had gone out there to do all I could to help that horse, I knew my grandpa was smiling down on me in heaven. I have learned to have a deeper appreciation of animals than I already had. I am grateful that I was able to have that experience so that I could feel that closeness with my grandpa.
Due to the risk of stolen content, full posts are no longer available via RSS feed.
This post is via www.girllovesglam.com
Click here to cancel reply.

Thats a funny story! we have a cow on our land who keeps getting her head stuck in our gates and I have a similar- Save the Day- story ;) Oh and I totally read american girl books too! Kirsten's books were my fav