Skip to Content
0 shares
Read Our Love Story Part 1 here.
I was excited to see what this “Danger Mouth” had to say. He looked mysteriously cute from his profile picture. To say that I was a little disappointed with his response to my message is an understatement. My message was a cookie cutter response telling me that he was a local rapper with a few upcoming shows that I should check out. I didn’t know how to respond. I wanted to know more about the guy behind “Danger Mouth”. Just as I started feeling a little sad, my computer screen lit up with another message. It was him again. He said, “p.s. i noticed that you go to paul mitchell. i’m trying to find someone confident enough to shave designs on the side of my head. if you’re down, let me know. it would be a blast.”
Ah! What did that mean?! Was he interested in me or just in my abilities as a hair stylist? I wrote him back. I wanted to know more about him. I told him that I had done a few designs with hair in the past. What I didn’t tell him, was that most of them were just straight lines. BUT he did ask for someone confident enough, not with enough skill necessarily. I just told myself to fake it til I made it. I told him about how I had just finished beauty school and that before beauty school had taken over my life, I was a very regular supporter of the local music scene. Then I asked him where he was from. I didn’t want to talk about music and hair. I wanted to talk about him! 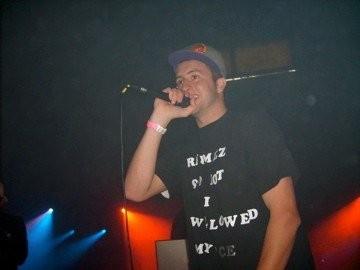 Maybe I had asked too much. I checked my computer way too many times before I decided I just needed to go to bed and forget about it. He wasn’t writing me back. When I woke up the next morning, I rushed to the computer to see if I had a message. My stomach was in knots! The computer wasn’t loading fast enough! It seemed like eternity had passed before it finally loaded. I saw what I had been waiting to see. That notification telling me I had a new message.
He was talking about his hair some more. Then, the part I had been waiting for. He told me he was from Salt Lake City, but was currently going to school in Rexburg and he asked where I was from. He was interested in me! Then, he said something I wasn’t expecting at all. He said, “depending on your spontaneity, we’ve got two more seats in the party car going to the show in logan thursday if you wanna jump on. it would help a lot to have some people that know the name there in logan since it will be my first show there.” Say what?! Was he seriously asking me to go to another state with him for the day? He was! This time, I had to keep him waiting.
I didn’t write him back until later that afternoon. I didn’t know what to say to him. I didn’t know this guy! What if he was a bad driver? What if he was just a creep? What if, what if… but for some reason, I didn’t feel like that was the case. I felt like I already knew him. I felt like it would be ok if I went. So I wrote him back. I asked him for more details about their trip. I told him that I was from Idaho Falls, that I had lived in Rexburg for a while, and that I was planning on moving to Portland.
He wrote me back 30 minutes later. He gave me more details about his show in Logan, talked about his haircut, and joked about Rexburg. I liked him even more. When I wrote him back, I assured him that driving to Utah with a complete stranger wasn’t something that I normally did, but that I was seriously considering it. I told him that I would have to sit on it for a few days, but that I would let him know for sure. Time went on without hearing from him for the rest of the evening, but when I woke up and checked my messages, I was pleasantly surprised to find not just a message in my inbox, but a rap in my inbox. A rap about me!
she had brown eyes black hair with purple streaks to match/
the color scheme of her favorite rapper, she was his biggest fan/
so flamboyant and sorta socially annoying/
he still left her freestyles as a surprise the next morning/
but right now her z’s are snoring and i’m wide awake/
delegating brainwaves to a stage on wednesday/
where there’s a girl who never really has to try to look chic/
with her brown eyes, black hair and vibrant purple streaks/
Woah. Did he really just write a rap about me? I tried writing one back, but let’s be honest, I am not a rapper. I was sure to make that very clear while writing it, but I am sure it didn’t take much time for him to realize it! We wrote back and forth for a little while before I had to go to work. We exchanged phone numbers and started text messaging right away. I learned that his real name was Dave. It was nice to know a real name. All I could do was think about Dave from then on. I went to work and told some of the girls about him. One of the girls told me that she had met her husband on Facebook and that I was bound to marry this guy. Was I? After work, I had another message in my inbox. It was another rap!
i had numbers runnin through my mind cuz she had me doing math/
like me + mckenzie = the square root of rad/
not bad but… she made it come to me simple/
shoot. i thought she was down like a flipped reciprocal/
like on a scale to ten i had to count on both hands/
and remember to extend my text messaging plan/
cuz my phone was blowin up like hearts under high pressure/
i mean she’s got me writin poems to her, and i’ve never even met her/
however, she’s a trend setter/
and i’m tight like a trendy sweater/
i guess when you put it that way, things couldn’t get better/
I tried my hand in poem writing, but I knew it was no good, so I went back to talking about hair. We wrote back and forth for the rest of the night and continued into the next day via text messages. That was when my friend Jaelyn called me. There was a free bowling night happening that she wanted me to go to. It was in Rexburg. I really wanted to go. I really wanted to go to Rexburg. I really wanted to meet Dave. Would it be too weird if I called and invited him to go bowling? I didn’t call people! I was too nervous. I decided to just go to Rexburg and enjoy the evening with Jaelyn. When I was driving to Rexburg, I had a nagging feeling in my stomach. I needed to call Dave and tell him I was coming. I picked up my phone and dialed his phone number. It rang, and rang, and rang.
Then… he answered.

I love it!!! Can't wait to read the next chapter!!

Can't wait to read the next chapter!!! The raps are awesome!

This is so fun to read! My love story is pretty boring in comparison. So awesome that he wrote you raps! :)